Prayer flags have been around for thousands of years. These colorful flags are often seen floating above river crossings or atop mountain passes protecting those traveling through. Originating in Tibet, they were first used as banners to differentiate warriors going into battle. As Buddhism proliferated in Tibet during the seventh century and flags were used for blessings to protect Buddha.
Each colour of the flag symbolises an element
The red, blue, yellow, white and green buddhist prayer flags represent elements like air, fire, water and earth. White symbolises air, red is fire. Green is water, yellow is earth, and blue is wind. 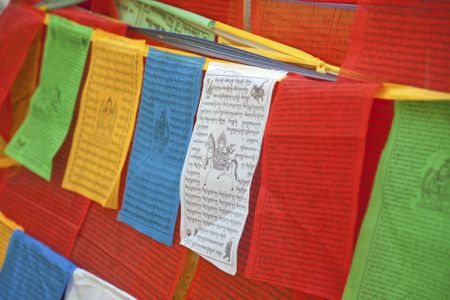 This mantras have no definite meaning, the flags doesn’t carry prayers to god, essentially carry our prayers via the wind to get them answered, Basically It’s a combination of values like compassion, ethics, patience, diligence, renunciation and wisdom. It is said that if you recite the mantra during meditation, it can cure pride, jealousy, ignorance, greed and aggression. There are two kinds of Flags, vertical and horizontal, The horizontal ones are called ‘Lung Dar’ and the vertical ones are ‘Dar Cho’.
They are more in wind, the reason why they are put high above the roof is so that they flutter in the wind. It is said that they emit positive spiritual vibrations and that the prayers are carried by the wind like silent prayers. Colour waning from the flags is considered auspicious.