A temple is the place where a devotee tries to remain free from the perception of evil of birth, death old age, disease and entanglement with children, wife, home and the rest of the world. The main motive is to do worship and every other thing becomes unimportant. One of the reasons why Guwahati is referred to as Pragjyotishpur or the city of eastern Astrology is because of the Navagraha temple. Navagraha or the temple of nine planets is situated on a hill top in the heart of Guwahati. It is a mere 3 km away from the Railway Station. In ancient times, it was said to have been a great centre of study of astronomy and astrology. It is accessible by taxis and auto-rickshaws. The temple which is in existence at present was built by the King Rajesvar Singha in 1752 A.D. The garbhagriha or the inner quarter of the temple survived the earthquake, while the upper portion was rebuilt with corrugated iron sheets. Also, there is a tank close by, called Silpukhuri Tank, excavated under Rajesvara Singha. 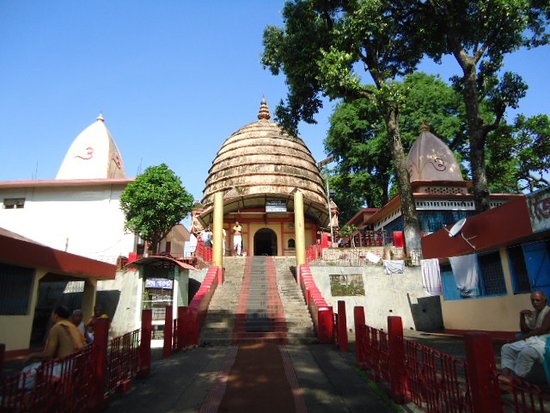 It is believed that the olden name of Guwahati – Pragjyotishpura originated from the temple’s astronomical and astrological centre. Another added attraction at the premises of the Navagraha Temple is the Silpukhuri, a tank which is perennially full. The temple is well connected to the other parts of the city. Also, the temple premises are used as a research centre for both astronomy and astrology. In addition to the elegant edifice, elaborate inscriptions and interior decor, the temple complex offers spectacular views of the Brahmaputra river and the valley below. It is the oldest tourist attraction in the city, it overlooks upon the grand view of the city, home to many monkeys who have inhabitant the place for generations.

Guwahati is well connected through state-run buses, taxi cabs and auto rickshaws. You can either drive down or hire a private vehicle. Alternatively, you can take a public bus till Cenikuthi bus stop and climb up to reach your destination.